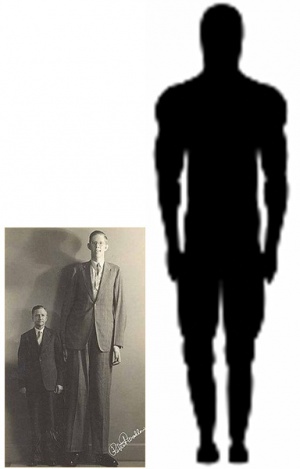 During Contact Report 173 Quetzal stated that Andron was, more precisely, 5 metres and 26 centimeters tall. This corresponds to just over 17 feet and 3 inches tall. For comparison, the tallest Earth human on verifiable record was Robert Pershing Wadlow, who stood at almost 9 feet tall.

Goliath
According to measurements given in our present day Bible,[citation needed] a famous ancient warrior, Goliath, stood at approximately 9 and a half feet tall, only half a foot taller than Robert Wadlow. Goliath is considered to be the tallest Earth-bound human on record that is not verifiable.

Both of these men would find their place in the Guinness Book of World Records.

[Right] is a picture of Robert Wadlow’s father, who stood at just under 6 feet tall, standing next to his almost 9-foot tall son. To the right of them is the silhouette of a man, which corresponds to a 17.25-foot tall man standing next to Robert and his father. Thus, the reader can get a better idea of how large a person the spy in this contact conversation was confronted with.

Encounter with crazy enthusiast
In Contact Report 175 Quetzal explains a situation where Andron was involved. It was a very unfortunate regrettable incident actually, resulting in the person taking their own life, which certainly was not the intention. It's explained that a crazy individual had got himself into a real mess of a mental state, a tragic mentally impaired situation, where he could not tolerate the fact that it was all real and became fanatical. He was creeping around near the SSSC for some time, the individual was illegally on private property, it probably amounted to quite some time and several instances. Anyway, Andron one day turned off the cloaking device and stood up, some distance from the individual, and the individual saw him. It affirmed in the individuals mind (probably because he was particularly tall) that it was all indeed real and it caused him a problem and he some time later committed suicide.

The individual was illegally on private property. Andron probably should have known better, but he wasn't to know that the individual would take his own life.

This is yet another reason why they can't present themselves to the general public, even the normal sized ones, it is against their rules. And why FIGU itself has to be careful and take care with who they communicate with and what information they provide etc.

Billy in FIGU Bulletin 103 on the subject of an entirely unrelated matter said "such a crazy and entangled impairment of consciousness can't be helped by it when his weakness is called open, [I don't like to do it]"