Phaeton, Phaëton and elsewhere occasionally Phaethon (Phaéthōn) in relation to Greek mythology. Is a word that has the same meaning as Malona in the context of the contact reports, its referring to the same planet. Malona should be read in the first instance as this page, Phaeton, is dedicated towards the meaning of the word Phaeton and the Titius–Bode law formula, rather than towards information pertaining to the planets history or its presence in the contact reports.

Phaeton is a purely Earth created word, originating from ancient Greece, though perhaps having been handed down to the Greeks. Which later was adopted and subsequently adapted by Heinrich Wilhelm Matthäus Olbers having worked with Johann Daniel Titius's formula, 'Titius–Bode law'. Which is a hypothesis that the bodies in some orbital systems (including ours), orbit at semi-major axes in a function of planetary sequence. 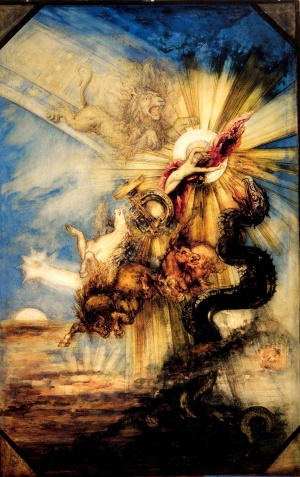 In Greek mythology the name "Phaethon" means "Shining One", it was also given to Phaethon, son of Eos, to one of the horses of Eos (the Dawn), the Sun, the constellation Auriga, and the planet Jupiter. While as an adjective it was used to describe the sun and the moon. In some accounts the planet referred to by this name is not Jupiter but Saturn.[1]

In Plato's Timaeus, Critias tells the story of Atlantis as recounted to Solon by an Egyptian priest, who prefaced the story by saying:

There have been, and will be again, many destructions of mankind arising out of many causes; the greatest have been brought about by the agencies of fire and water, and other lesser ones by innumerable other causes. There is a story that even you [Greeks] have preserved, that once upon a time, Phaethon, the son of Helios, having yoked the steeds in his father's chariot, because he was not able to drive them in the path of his father, burnt up all that was upon the earth, and was himself destroyed by a thunderbolt. Now this has the form of a myth, but really signifies a declination of the bodies moving in the heavens around the earth, and a great conflagration of things upon the earth, which recurs after long intervals.[2]

The first mention of a series approximating Bode's Law is found in David Gregory's The Elements of Astronomy, published in 1715. In it he says:

"supposing the distance of the Earth from the Sun to be divided into ten equal Parts, of these the distance of Mercury will be about four, of Venus seven, of Mars fifteen, of Jupiter fifty two, and that of Saturn ninety six."

A similar sentence, likely paraphrased from Gregory, appears in a work published by Christian Wolff in 1724.

When originally published, the law was approximately satisfied by all the known planets — Mercury through Saturn — with a gap between the fourth and fifth planets (Malona). It was regarded as interesting, but of no great importance until the discovery of Uranus in 1781 which happens to fit neatly into the series. Based on this discovery, Bode urged a search for a fifth planet. Ceres, the largest object in the asteroid belt, was found at Bode's predicted position in 1801. Bode's law was then widely accepted until Neptune was discovered in 1846 and found not to satisfy Bode's law. Simultaneously, the large number of known asteroids in the belt resulted in Ceres no longer being considered a planet at that time.

The discovery of Pluto in 1930 confounded the issue still further. While nowhere near its position as predicted by Bode's law, it was roughly at the position the law had predicted for Neptune. However, the subsequent discovery of the Kuiper belt, and in particular of the object Eris, which is larger than Pluto yet does not fit Bode's law, have further discredited the formula.

Bode's law was discussed as an example of fallacious reasoning by the astronomer and logician Charles Sanders Peirce in 1898.[3]

Here are the distances of planets in the Solar System, calculated from the rule and compared with the real ones:

Today, the Phaeton hypothesis has been superseded by the accretion model.[4] Most astronomers today believe that the asteroids in the main belt are remnants of the protoplanetary disk, and in this region the incorporation of protoplanetary remnants into the planets was prevented by large gravitational perturbations induced by Jupiter during the formative period of the solar system.