Analysis of the Wedding Cake UFO

The new photo analysis of the WCUFO, by an expert using state-of-the-art technology, conclusively demonstrates that Billy Meier indeed photographed a large flying object, of unknown origin, 63 times. A video that Meier took of the WCUFO can be found on our homepage.

About the author of the report, Rhal Zahi: University Professor, systems and civil engineer, project manager and business consultant for multinational companies. Expertise in image processing, web animation and computer modeling. There are two videos with further exploration of the WCUFO by Rhal Zahl here and here.

For the photo #800 analysis, it's all about how far the WCUFO was from the carriage house (CH) wall, judging from the width of the CH's image in the reflected spheres relative to the diameter of the spheres. For this, Zahi needed a good plan view of precisely where the CH was located with respect to the main residence, which is the building that shows up in the background of photos #800 & 799, which he also analyzed. (So he got that from Google Earth, which didn't yet have a good view of the property when I had done my analysis some 10 years ago.) He used a computer program (called Blender), which accurately places reflected images of surroundings in any mirrors that you designate, even curved and spherical mirrors. So, having the layout of Meier's property and a nice computer model of the WCUFO with its reflecting spheres in proper positions, he could examine the width of the image of the CH in the spheres relative to the diameter of the sphere. Only when he had the model WCUFO be the proper distance from the CH did the reflected image of the CH on the modeled spheres have the same width as in photo #800. This distance was some 20 ft. away.

But he checked this against the reflection from a model sphere (small reflecting sphere; call it a marble) within a physical model of Billy's property, and took photos of that, when the marble was at various locations away from the cardboard-model CH. Only when the marble was the proper distance away did its reflected image of the CH have the proper relative width on the marble sphere. When this distance was scaled up from the model to the real Google Earth dimensions of Billy's property, it corresponded to the WCUFO being some 23 feet away. Each figure has a plus-or-minus error figure, within which they show agreement that it was this general distance away from the CH -- 20 ft - 23 ft or so, 6 or 7 meters or so.

But then also, Zahi had to know that the camera & Meier were situated right close to the CH, not 20 feet or so away towards the main residence, using a model. He showed this in four different ways. One way was to show that if Meier & model had been out in the middle of the parking area (courtyard) somewhere, then the main residence in the background would have looked way too large (too close) in the photo. Another way was to show that if Meier had been located with a model much closer to the main residence, he himself would have shown up in the photo because his model would only have been 3 ft away from the camera. (He proved this by showing a photo of the reflection of someone close to a sphere and also in the computer model.) A third way he showed it: in the reflections of the CH in Meier's hypothetical model, the location of the CH within each sphere of the model would have shifted a bit due to the appreciable distance between the camera and the CH (a parallax effect). Such does not happen within adjacent spheres of the WCUFO of #800 or 799, since Meier's camera was close to the CH wall. The fourth way was by calculating how far away the camera had to be from the main residence, knowing certain dimensions of the main residence and the width it occupied on the film (as well as knowing the camera's focal length and the film size). All four ways agree -- Meier had his back close to the CH wall when taking those photos.

But also, Zahi had to know just where Meier was standing relative to the CH wall -- was it near one corner or the other or in the middle? But this was obvious to him at first glance of any of the reflections of the spheres on #800 or #799. The cameras location within the reflected image from each sphere is at the exact center of the sphere as you view it. (I had failed to realize this fundamental and obvious fact.) So, Meier had been standing next to the center of the CH's wall.

But then also, to get the dimensions of the CH correct, and the fact that its eaves show up fairly prominently in the reflections, and the fact that the CH underwent some modifications shortly before 1980, he had to check with Christian pretty closely, and also make use of a frame from the movie "Contact" taken before 1980.

So going from the WCUFO's sphere's distance away from the CH to the WCUFO outer diameter involved a little arithmetic. It was somewhere between 3.0 and 3.6 meters in diameter (Meier and Christian said it was the 3.5m craft). Figure C6 best shows Zahi 's result, I think.

His analysis of the treetop WCUFO photos was especially impressive to me. By examining the spheres' reflection closely, in photos #834 & 838, Zahi noticed that the outline of the small forest treetops was evident. This meant that Meier himself was up at treetop level taking the photos (from Quetzal's ship). He showed that if the WCUFO had been a model somehow suspended behind the nearby tree's uppermost branches and in front of the more distant tree, such a model would have had to be very close to that nearby treetop, in which case the latter would have shown up as rather large in the spheres' reflections, which it does not. It also meant that Meier himself (or supposedly a two-armed confederate who had climbed to treetop level) would have shown up in the sphere's image, which of course they do not. Since the WCUFO was not a model, it was farther away than any model would have been -- close to the tree behind it -- and so Quetzal's ship itself does not show up in the reflections of the spheres in #834 or 838 or others of that series; the forest treetops behind Quetzal's ship did not allow it to stand out against a clear background, and so that craft does not quite show up against the forest treetop background in the reflections from the spheres in 834 or 838.

And then in his 74-page article RZ included the strong evidence that one of the nighttime WCUFO shots showed the craft with its upper part extended upwards by a significant amount. This took a bit more geometry for him to show.

It seems that there’s always more than meets the eye…much to the discontentment of the skeptics who came out shooting first, to prove a hoax, rather than discover the truth. Rhal Zahi, who provided the new analysis of the WCUFO photos, has discovered a few more things about it.

I’ll let him describe it for you but first, so you have a reference point, the photo that he enhanced for further examination is this one: 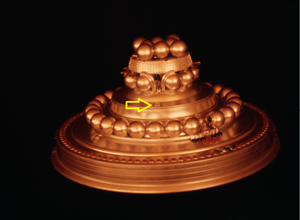 Now, in his own words:

“More on the WCUFO at night. In the attachment below you will see an enhanced image of picture 873. I think it is interesting because:

- It shows the WCUFO was photographed from a hill and that the photographer was above the WCUFO.

- There is terrain visible downhill. There is a pole below (part of a fence?) that projects a shadow downhill.

- A walking path is visible.

- There is a halo around the WCUFO that extend upwards. I have no idea what this halo could be.

- There are no wires, or any other supporting mechanism. It is freely flying in the air? 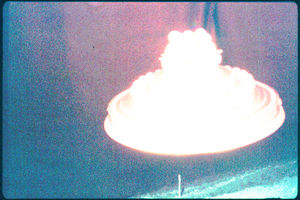 You may play with picture 873, with PhotoShop, enhancing details to obtain this image.” And here’s another enhanced version of the same nighttime WCUFO photo by Savio: 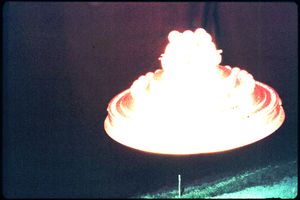 Savio: “Details of the pole can be seen as well, obviously it is in focus and close to the UFO.”

So it seems that the very laborious efforts by the skeptics, along with all of their arrogant false assumptions, accusations and conclusions, are further shredded and relegated to irrelevancy. And the reality of the WCUFO becomes ever clearer thanks to what is revealed when the details are no longer hidden in the dark of night.

Indeed, it’s a metaphor for the Billy Meier case itself, as the most important story in all of human history, which has actually been hidden in plain site for decades, now begins to shine the light of truth on a world too long dwelling in deep darkness.

You ask, “Enhancing the brightness of the WCUFO photo doesn’t reveal much if anything at all about the object itself, so what’s the point?”

You missed the most significant thing that Professor Rhal Zahi’s sharp eyes spotted but he couldn’t explain.

when I recommended the (English language) book, “Unconventional Flying Objects: A Scientific Analysis by Paul R. Hill”, written 19 (!) years ago. Sadly, almost nobody seems to follow Billy’s strident admonitions to “read books”. Until/unless they do, Earth is doomed. (And Billy only writes in German.)

“Paul Hill has done a masterful job ferreting out the basic science and technology behind the elusive UFO characteristics . . . Perhaps this book will help bring solid consideration for making all that is known about extraterrestrial craft publicly available.” –Edgar Mitchell, Sc.D., Apollo 14 Astronaut

Since the Plejaren gave Billy unique photo opportunities, so far denied by the other ET groups here – and also denied us by our taxpayer-funded, corporatized, military/industrial complex (not “the government”!) criminals with their similar anti-gravity craft (eventually!) mentioned by Ptaah* – we can see this plasma halo really well on this cool, obviously calm, dark night. And the concomitant heat of the stationary, Plejaren, self-luminous craft makes a pretty plasma convection plume – if you can see what you’re looking at – even without being photographed using schlieren equipment.

I hope this has been of some assistance.

P.S. Bruce – thanks, as always, for your kind words and welcome contributions. There’s more than one good reason why I think I have to now distance myself from this venue, but my inability to correct all the many “errors of fact” – which my public attempts to convey Billy’s truth in English invariably attract – here on this blog by/for non-German readers, means that my presence here would naturally be interpreted as my tacit endorsement of those many, ongoing, uncorrected, factual errors. As Billy says, “…Wahrheitsverfemende meiden … Wahrheitskünder, oder sie versuchen mit allen ihnen zur Verfügung stehenden Mitteln, diese zu vernichten, zu schädigen oder gar zu töten.” (…proscribers of truth avoid…truth announcers, or they try to annihilate, to damage or even to kill them with all existing means available to them.)