“Popi” Kalliope Meier Zafiriou - Billy Meiers ex-wife. Key UFO and paranormal activity and phenomenon witness according to the witness listing. Zafiriou is her maiden name. Her full name is found signed at the bottom of the witness statement article written by her included in Contact Report 119 and her signature is on the Affidavit. [continue reading]

Kalliope is Billy Meiers ex-wife. They divorced in 1997, at the time Billy had been informed their marriage would be legally dissolved, in a private conversation in 1979, which he was not permitted to publish until 2003.[1] In truth she felt no love in herself for Billy and only married him because she wanted to free herself from the conditions placed upon her by her own family, where she was under the terrible religiously indoctrinated thumb of her wildly religiously abusive mother, revealing her art for acting. She theatrically deceived Billy and FIGU group members, harming them all financially, damaging their belongings, reputation, and the mission for a couple of decades.[2]

The Plejaren assessed in 1979 that she had been unlawfully passing sensitive details and personal information of the internal FIGU group members by telephone, directly verbally, through sound recordings and letters to the outside and to non-members. But they could not openly disclose this information because then hatred, vindictiveness, and injustice, would have arisen, demanding other group members be informed, which would have jeopardised the entire FIGU mission. Consequently they had to tread another path, which consisted of Kalliope removing herself from the FIGU group association by her own initiative and by going her own separate way, which occurred in the mid-nineties, which finally rid FIGU of her abusiveness, altercations, hassle of her dishonesty, disadvantages to FIGU, the group members, and the mission for her own profit.

Despite all this going on in the background, Billy and Kalliope would have however shared many wonderful memories with eachother during their 31 years or so of marriage. Anyone who has experienced or seen a divorce separation, particularly after such a long relationship and involving children, e.g. been a child and gone through those motions with their parents over years, appreciates that it goes on for a fair few years and gradually breaks down, where there is no love. The various details of their divorce are private but she didn’t love him.[3]

Kalliope gave a number of reasonably positive reviews, saw plenty of UFO's, wrote her own FIGU articles about what she saw and experienced while there, witness statements, signed an affidavit, conducted interviews and worked for 'the Billy Meier case' and FIGU at the Semjase Silver Star Center. The divorce subsequently allowed her to pull herself out and then more substantially negative, vengeance reviews and less restrained interviews emerge thereafter. She hadn’t properly rejected it all after all those years of experiences and therefore developed a keener interest in being interviewed than before. 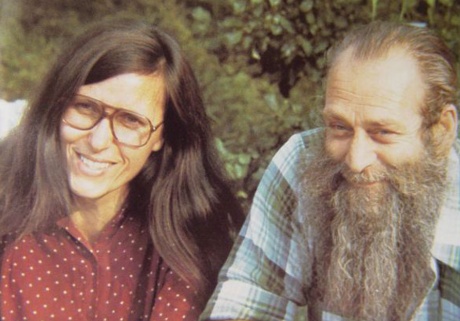 Kalliope Zafiriou (nickname Popi/Poppi), named after a rare beautiful bird (Calliope hummingbird), was born in Neoi Epivates, Greece on the 3rd of November, 1948. She was brought up as a strict Greek-orthodox and spent it partly in the monastery and changed to atheist in later life,[4] just like the vast majority of people exposed to religion during their childhood do. She started working in a factory at age 14, but wanted to be either a dressmaker or hairdresser. Her father worked as a fisherman. Her mother saw her as a child resulting from an unwanted pregnancy (by the late 1850s several major rubber companies were mass-producing, among other items, rubber condoms). Her mother required unconditional obedience from Kalliope, and regularly beat her when she wasn’t, which is how her hatred developed toward her mother.[5]

She first met Eduard when she was 17 years old on 25th December, 1965, in the city of Thessaloniki.[6] At that time Eduard wasn’t far off twice her age at 29 years old. By that time he had already lost his left arm from the bus accident, about 5 months prior to them meeting on the 3rd of August in Iskenderun,[7] Turkey. A month after they met, Eduard popped the question to Popi, she said yes and they got engaged on the 25th of January 1966. Her parents didn’t approve and consent, she already hated her mother for traditionally slapping her religiously as a child,[8] so a month later the pair of them ran away together, eloped, to get married in secret, on the 25th February, 1966.[citation needed]

After encounters with the police, being searched and threats by her family. They got married the following month on 25th March 1966,[9] in the city of Corinth.[10]

Billy told Kalliope in 1975 about the extraterrestrials. Since 1975, Kalliope’s task at FIGU was the comprehensive household duties, where she cooked daily for up to 16 including the group members and children. In addition, she also greeted visitors to the SSSC, took care of the library and processed the mail of about 100 to 120 FIGU passive members.[13]

For reasons she hasn’t publicly made clear, Popi left Billy and the SSSC, launching divorce proceedings in the spring of 1995, just as Semjase as had told him she would.[14] She officially quit FIGU on 3rd August 1996, and her marriage officially ended in June 1997. She then became a nurse, as she had wanted for years. According to her son Methusalem, Popi was later in a relationship with a man for 2 years, but has been living alone since they broke up.[15]

Kalliope in 1991 signed an Affidavit. An Affidavit is a written statement confirmed by oath or affirmation, for use as evidence in court. The translation reads:

The undersigned herewith confirm that they have never observed or known Mr. Eduard Albert Meier (Billy), residing at CH-8495 Schmidrüti/ZH, of ever being involved in any unfair intrigues or manipulations in order to feign false facts, much less ever having been involved as assistant himelf.

Furthermore, we know of no wealthy backers ever giving Billy material help in any way with the attainment of his ufological slide series and short films.

We also confirm that the reports of our experiences outlined in this book completely correspond to the truth. If need be, these statements can at any time be sworn to before a court of law.[16]

Followed by many signatures including Kalliope Meier.

Kalliope in 1979, while being interviewed by Ufologist Jun-Ichi Yaoi.
Courtesy of Lee Elders.

Kalliope saw Ptaah by mistake for 15 seconds on Eduards birthday, 3rd of February 1979 and wrote up an article about it which was included in Contact Report 119. The exchange lasted long enough for her to make reasonably descriptive observations. She walked into the living room at the SSSC and saw a tall bearded male figure dressed in a grey, full body, overall suit, which had a large round opening in the neck for a helmet, which he wasn't wearing. Around the belt were attached some strange devices and apparatus things. Upon unexpected sight of each other she was startled and he took a step backwards, grasped a small device on his belt and disappeared.

Kalliope was among the fifteen witnesses present during the Variant III Beamship, forty-eight minute tape recording, which was made on 7th July, 1980, in Ober-Sädelegg, Switzerland, on four seperate cassette recorders. Kalliope gave her own Aiwa recorder to Billy, and then stood approximately 450 metres west of his position. Many residents of the small hamlet of Zinggen, three kilometers away heard it, prompting several of them to run up the hill in search of the source of this strange loud whirring noise of the unmuffled device, arriving after it ended. Two members of the D. family however, who lived a half-mile away, came just in time to observe the final minutes of the recording.

Quetzal regarding an argument between Billy and Kalliope.

18. It could actually have come out very badly since your wife had, with great strength, flung the knives and forks in your face over the kitchen table.
19. You could have been killed by the kilogram weight of the crystal ashtray which she hurled, right across the whole kitchen, at your head.

How can you be sure of the authenticity of the Meier case?
Kalliope passes lie detector test.

Billy has generously shared with us many of his older poems in his 2004 book, "61 Jahre Gedichte Sprüche Aphorismen" (61 Years of Poems Sayings Aphorisms). From there we learn - from many touching love poems written for his beloved Kalliope - that "Kannibalen" was one of Billy's affectionate nicknames for his wife, along with "Kannibalenkind", "Agapulla" and "Agapimo".

And now a short reminder of the early travels of Billy: In 1967 Billy and his now ex-wife, Kalliope continued their travels towards the Far East, namely to Karachi, West Pakistan. During their stay they were both taught about Islam. Billy’s reason to study Islam was because of his task to get to know the world religions and to learn them thoroughly.

When somebody converts to Islam, he/she is usually given an Arabic name(s) if he/she doesn’t already have one, and so Billy was given the Muslim name Mohammed Abdullah and Kalliope (his ex-wife) the name Ayesha Abdullah.

Kalliope watched some lights high in the sky above the SSSC with many other folks in 1991.

Kalliope was involved in an assassination attempt while driving with Billy in the car, brakes failed and she crashed it into a wall at 40mph, in 1978.

Kalliope in the account of the Beamship Sounds event.

Kalliope will incarnate again into a new personality between 2065 and 2072 and some time later approach the FIGU again. Which might mean she may die between 2051 and 2058, at an old age.