Space Travel involves the transportation of human beings through space, free-space and is related to Beamships, Dimensions, Time Travel, Space-time configuration and of course Planets.

Traversal of the space between heavenly bodies such as planets, moons and comets etc., is needless to say very dangerous, any specialist will tell you and therefore a really brilliantly engineered, finely calibrated machine is required. To get that machine requires hundreds and thousands of years of evolving ideas, painstaking trial and error, learning from mistakes, carefully focusing on the matter and concentration - and big money if that civilization has that style of social-system. If a planets human population is genetically modified for whatever reason, causing them to age up rapidly, at an accelerated rate of development, evoluion i.e. full-life-expectancy of under 100 years, then that civilization additionally requires a policy of data-sharing, openness and educational transference of some form or another, because such technologies require considerable work and a vigorous perfecting, which may take several thousand years, depending on their initial state of consciousness-evolution i.e. assuming they had not had their civilization restarted for whatever reason in their recent past.

It rarely deals with rockets, explosive noisy contraptions and strange wagons with FIGU, Billy Meier and Plejaren. With the Plejaren it involves highly well engineered transportation aerocraft which have a really well evolved propulsion system inside a suitably protective shell with all sorts of technological achievements, breakthroughs and advances. We have these things on Earth, even if in a much lesser state of development than that of the Plejaren, but which is kept an open-secret from the general public. The concealment, for commercial reasons, military concealment reasons, delusion etc., whatever it is, needless to say really stunts the potential progress that could be made successfully with it. Usually on Earth a small quantity of individuals involved in these developments have to hide their knowledge and keep it within an organisation, if none other than the operation being too grand a scale to hide in a garage or basement. This means that better solutions may be available, but are not permitted for whatever reason, it may also mean starting again and again. The current approach on Earth is to burn oils and create big propelling explosions using big torpedo style wagons, with no protection from the forces of gravity being exerted on the human body etc., as is well known, despite the oil reserves quickly running out. To do what the Plejaren can do will require several rethinks about that approach and methodology. It might require government intervention to ensure the progress happens properly and in a timely manner too. On planets where the civilisation is divided into a hundred nations or more an additional complication arises because the scientist talent pool tends to be limited. For all these different reasons space travel is far from the rule, the majority of civilisations never make it to that stage. 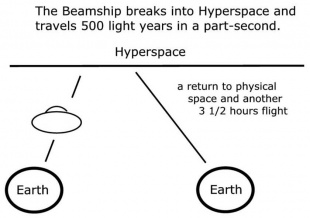 An illustration from a book by Randolph Winters.

"Actually, hyperspace may only be penetrated very far in outer space, otherwise, planets would be pulled in."

See Destroyer planet a.k.a. the Great Comet of 1680

33. To travel through real outer space, one needs a drive that surpasses the speed of light many times over.

34. This propulsion can only become activated, however, when the speed of light has already been reached.

35. As a result, another drive is needed to regulate the normal speed up to that of light.

36. This means then that a beamship needs two propulsion systems: first, a normal drive which permits acceleration up to and below the speed of light and, second, a hyperdrive as you call it.

37. A drive, therefore, which generates a velocity a million and billion times that of light; the hyperspeed, which enables us to enter hyperspace.

38. A space in which every mass expands in proportion to the increase in speed.

39. Consequently, time and space collapse and they become null-time and null-space.

42. And exactly by this manner is created the fact that distances of countless light-years can be traversed in a fraction of a second without causing a shift in time.

44. For example, when we leave our Pleiades and require about seven hours to get to Earth, then seven hours pass on our own planet and on Earth, as well.

45. It takes us this long because we must first fly with the normal drive beyond the reach of the planets; only then, faraway in space, can we convert to hyperspeed.

46. A long way from your solar system, we exit hyperspace and convert to normal propulsion as we continue to fly here.

47. We are never allowed to penetrate hyperspace too close to a planet.

49. Actually, hyperspace may only be penetrated very far in outer space, otherwise, planets would be pulled in.

50. Also, concerning the exit from hyperspace, you figured it out entirely correct.

51. It is also a fact that some comets originated in this manner, but only a few; most of them were guided on their dangerous path by other natural events.

52. In this case you are only partly right when you assume that all comets originated in this manner, as you perhaps suspected.

53. But the fact is, such events are caused by irresponsibility, because it exists throughout outer space, not only on Earth.

54. Irresponsibility is evident also when new highly developed intelligences perform their first ventures into hyperspace too close to other planets.

55. The safety rule is calculable and states that hyperspeed is only to be initiated 153 million kilometers (95,625,000 miles) away from the nearest planet.

56. I am not at liberty to give you specifics on this, unfortunately.

57. If scientists on Earth obtained more details, they would resolve their propulsion problems in a very short time.

58. This is neither in our nor the cosmic interest, for the Earth human is still not liberated and mature enough to fly into space.

59. But at the given time, which isn’t very far off, he will find the solution to his problem himself.

60. I am only permitted to tell you that many of your scientists are already on the right track and are theoretically working at and researching the necessary propulsion systems.

61. I may tell you also that, in some basic form, these propulsion systems are already known in outline form to your scientific community as light-emission and tachyon drives.

62. The light-emission drive serves as normal propulsion and has the function of propelling the beamship onto planets or within their vicinity, up to the 153 millionkilometer distance – the safe distance, that is.

63. Then the tachyon drive, among others, is activated when greater distances need to be traversed.

64. This is one of the hyperdrives which are capable of conquering hyperspace and space and time.

65. We call both of these propulsion systems by other names, but the meaning is the same.

66. We have a different language than people on Earth, and for this reason I need to explain it to you in terms you can understand.

Thanks, that'll do, as I don’t want to pressure you. One thing still interests me, though: As I assess and ponder it carefully, the form of the beamship plays no decisive role, and yet a disk-like ship would be the ideal shape because surely, in the atmosphere, it offers the least aerodynamic resistance, which might also be the case in water.

68. Certainly. You have hit the nail on the head again.

69. Basically, though, the form really makes no difference.

70. However, the disk shape ensures the least resistance in an atmosphere, and besides, it offers the largest surface and best shape that allows the drives on them — or through them — to become fully effective.

This seems clear to me, but how is it possible for a beamship to attain immense speeds within the gravity field of a planet or in its atmosphere without burning up, or having the passengers succumb to the immense pressure?

71. This is very easy to explain and no secret any longer to the Earth human, at least not to the scientists:

72. The beamship is surrounded by a radiation protection shield that causes every little current of air to glide off without pushing against it.

74. Thus, this radiation protection shield has the purpose of protecting the beamship against extraneous influences and resistance, without destroying or pushing against anything that collides with the shield.

75. Anything that penetrates or offers resistance is simply deflected without pushing against it.

76. Pushing against it would mean resistance and would remove the possibility of unlimited speed.

77. Through the deflective quality of the radiation shield, another important effect is triggered which is of great and vital importance to the passengers.

78. The deflection technique of the radiation shield simultaneously neutralizes the gravitational force of a planet.

79. But this does not mean that gravity is simply destroyed, pushed aside or nullified.

80. The air, as well as some rays or particles and magnetism, etc., are simply deflected in the same way; as a result, its own normal gravitational and attraction forces prevail within the beamship.

81. This means, therefore, that a beamship bears the exact same gravitational force onboard as also prevails on the Earth.

82. Besides, the gravitational pull of a planet is not always equally intense, but it also undergoes a certain change, a fact your scientists will discover in the near future.

83. By gliding off the radiation protection shield—that is, the sliding off of gravity and magnetism, respectively—the beamshippractically becomes a miniature independent planet which can travel without risk through any atmosphere at nearly the speed of light.

84. Due to the fact that the gravity of the planet involved no longer has an influence on the beamship, the passengers feel as normal and unhampered as if they were on the planet, assuming, of course, that the planet corresponds with their anatomical capacities and is not subject to greater attractive forces (gravitational forces).

85. The attraction force inside the beamship is adjusted to suit the passengers, of course, and is absolutely controllable.

86. When beamship passengers from other worlds move about on foreign planets with a hostile atmosphere or hostile gravitational forces, they use spacesuits and small portable devices that generate for the entities the identical radiation protection shield as that on their own beamship.

This is very detailed and illuminating, but can you give me the technical details for the construction of such a device?

87. I am not allowed to do that, unfortunately, but I can assure you that your scientists are already working on the basics of such devices, and the day is not far when they will manufacture them.

88. However, it lies in the framework of evolution that the Earth human must first develop more in consciousness and spiritually before he will solve these secrets and not use them simply to hurt others.

89. But even then, the great danger exists that the barbaric earth people will use their technical knowledge and capabilities and their technical inventions viciously and greedily to satisfy their lust for power.

90. This has happened before and will happen again, not only with terrestrial humankind but other human beings on other worlds, as well.