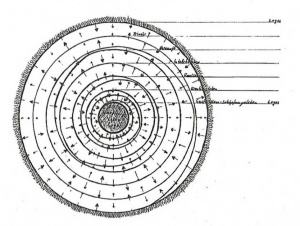 Illustration from the Wendelle Stevens book Message from the Pleiades. Which might be irrelevant to the subject of time travel, check.

Time travel is possible and has been utilised already by the Plejaren and the Timarians. Billy has also travelled through time, for instance, he has been to the past and observed dinosaurs and an Earth with two moons, conversed with a man of Middle Ages France named Jechieli and has even spoken to Jmmanuel. Billy has also travelled into the future and observed a devastating earthquake in the vicinity of San Francisco, California, USA and during which time there were also cars visible that had windshields extending quite far back, a type of car that has only just recently been prototyped. The Plejaren and Billy can also look into the future using both spiritual and technical methods.

If you're one that likes a drop of the old wine, but can't wait long enough for it to age. Time Travel doesn't age things, it will be the same age that it was at the time it moved through time. One potentially viable way could be to bury or hide it somewhere so you could, back in your own time retrieve it, but this methodology may well be contingent on it being the same Space-time configuration or Dimensions. We're not exactly sure about how Space-time configurations and Dimensions work, readers can research what the Plejaren have explained about that and check for themselves.

Billy may well have spent days, months, years, even decades in other times, which would mean he would be much older than his birth certificate legally makes him. Readers may research what has been explained about that if it interests them and check for themselves. But bear in mind a full life-cycle for an Earth human being amounts to some 120 years or so, he won't be much older than what we know him as a result of that.

Regarding encountering oneself during time-travel

From the FIGU Forum:

What happens when two persons with the same spirit form get together in a time trip, like Billy and Jmmanuel? Billy can tell his first hand experience, I hope.

ANSWER: It is not the "same" spirit form, even if it is of the same lineage. One spirit form is less developed/evolved than the other, and there are two entirely different personalities present.

The same is true even when a person visits oneself in the actual life (through time travel).

The best way to make this understandable is when a person of, say, 50 years looks at an old photograph when he or she was 10 years old. The child was a different personality than at the age of 50! You will be aware of this if/when you look at a photograph![1] 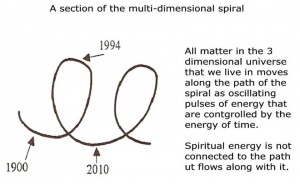 An illustration from a book by Randolph Winters.