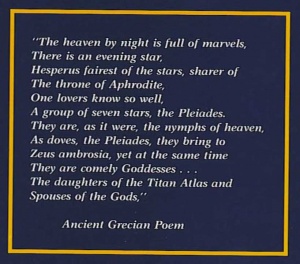 A quote included in the Wendelle Stevens book 'Message from the Pleiades'.

People from the Pleiades who actually do not exist.

According to Sfath's Explanation, Billy was told as a young boy that by initially using the term Pleiadian, when referring to the origin of his contactors, the fraudsters, fantasists and deceivers who would later claim to be in contact with Pleiadians would and have then been exposed.

Billy Meier and FIGU information is of a different character and that is obvious to any discerning reader.

Billy was told that the Pleiades star cluster in our space-time configuration is too young to support life i.e. uninhabitable, and the Plejares is the true star system from whence Sfath, Ptaah, Semjase and the other Plejaren originate.