Nokodemion is a spirit form which was created on the planet Sadr, which was long ago in the Waron star system, which moved in the Lyren galaxy, 3,816,000,000 light years distant from the Sol star system.

Nokodemion was the first incarnated personality of the same spirit-form that currently inhabits the human being known as BEAM.

“ ...they attacked foreign planetary systems, bestially murdered millions of people or clapped them in chains and enslaved them. Thus Nokodemion was faced with the choice of leaving his peoples to degenerate into universal monsters or command a halt to their murderous and power-hungry deeds...

Ptaah: This question also occupied us, so we asked the Arahat Athersata level, who explained to us that Nokodemion was a creation of the planet SADR, which was in the WARON sun system, which moved in the LYREN galaxy, 3,816,000,000 light years distant from the SOL system. 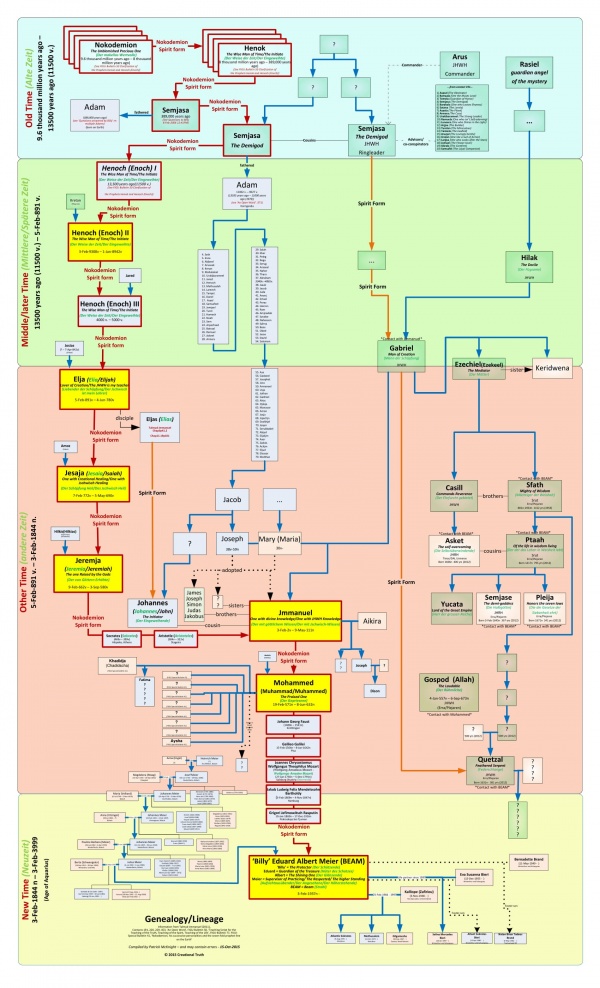 The Nokodemjon spirit-from has been incarnating on Earth for at least 389,000 years but these are the incarnations that are more recent, interesting and notable.

This section is not from an official FIGU publication.

Tremendous might and power, but it takes a lot of work in reality. How does the actions of one individual become the practices of millions for hundreds of years after (even if their actions were wrong) and why/how is this a feature of the universe? The answer is given over several hundred pages on this website by FIGU and Billy Meier explains. The fact of the matter is it does happen, it is possible and this is indeed a feature or component of the universe evidently. It is like the binding of history, belief, culture, identity and tradition all into one product. The truth is plenty of evolution occurs at every stage of the development of a global religion, and like all things, it begins, comes into being and later dies. Governments (on Earth at least) tend to be closely allied to religions because that's the location of the power they've always needed but never had; to justify their barbaric misunderstandings - so they've had allot to do with it too, on Earth anyway.

But does it work without extraterrestrials? Yes it does, it’s just not as effective and potent as when extraterrestrials from the Plejaren Federation are involved. It is something to do with the wellspring of knowledge they create when they get involved, which may be because they do things in an agreeable way (some use the word 'divine' instead of agreeable). They also very carefully select the country, language, location and subject arrangement for maximum effect, peak life-choice efficiency etc. It’s associated with reincarnation and the level of enthusiasm the audience takes that information up; their receptiveness, what's already in their Storage Banks - truth is Nokodemion in the Prophets incarnations has been telling basically the same story every time, and that story inherently includes extraterrestrials. There are also going to be individuals attracted to a fantastic story like that which are looking for something exotic, which is where it then turns into something of a pastiche - these words Pleiadian and Plejaren were barely even used before BEAM began writing about them back in the 20th century.

The overview the Plejaren Federation have; Earth humans are genetically modified (legacy) and have a very short life expectancy and abnormally accelerated history - they are able to give perspectives to the individual author that are ferociously powerful and far reaching - from this then a worldwide sensation occurs (apparently), because they can very accurately and precisely determine the consciousness rating of the Earth human by looking at this life expectancy data because of how long it requires to develop a human brain; thus precisely adjudge the consciousness based on that length of time. On top of this the individual can give information that is truth or based on truth (even if it later turns into and gets transformed somehow into myth and later religious practices), which creates the double edged sword - it makes a big varied audience. A basic requirement is the information must be somewhat relevant to the time and evolution stage of the human society i.e. their reading-age and what can be understood by them, appropriate for their comprehension - as mentioned; Earth has a greatly accelerated evolution i.e. history. In other words, writing extensively about UFO's and various other pertinent subjects today will be very relevant soon, because that is the time in which we live, it's in relative proportion.

It's not just Prophets that have achieved this special phenomenon, there have been others; Albert Einstein's work on the theory of relativity, one of the two pillars of modern physics, opened up and created something of a worldwide knowledge phenomenon - but this is more confidently relegeon, rather than religion, because it will as yet undergo several additional modifications, see Contact Report 251[1] (even if Plejaren sent telepathic-impulse transmissions to him, see Contact Report 424). See What is Religion and What is Relegeon? from Arahat Athersata (book) Chapter IV, Evolution, Verses 75-80 - Billy Meier has followed a similar stencil in several ways because he beats around the bush with certain explanations, prompting us to examine what he means for ourselves, even if the explanations rolls over many books.

At any rate, BEAM is centre position in Ufology - for what Ufology is currently worth as a study; the centre of it nonetheless.

For further reading see Goblet of the Truth (book) and principles of Irreligion (Wikipedia) - and ageing, consciousness, Human Brain and Human Being.