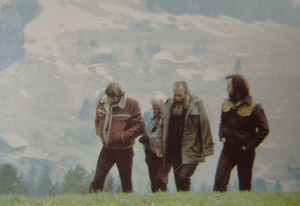 Lee Elders is one of the original investigators.

In matters concerning myself

Through slanderous intrigues that lead back to the early eighties, unpleasant differences resulted in connection with Lee Elders/USA, and as a consequence, a leaflet was printed in an edition of three hundred (300), and about one hundred and eighty (180) copies of it were distributed. The leaflet presented explanations that more than twenty years later turned out to be lies and slander, and were quite consciously and calculably circulated by persons whose aim it was to oust me, ‹Billy› Eduard Albert Meier, from the position of being the virtually most important person in regard to the contacts with the Pleiadians. The idea of these defamations was to take my place through egotistic behaviour, arrogance and overbearingness, and push me into the background. The persons concerned intended with it to take over the stage, in order to be able to nourish their self-interest in living in a selfish and inconsiderate manner, and in fact, consciously and thus against better understanding, the truth was transformed into lies and slander in order to reach the abominable aims. Thereby, I was badly deceived and misled, while Lee Elders was evilly and slanderously reviled and was insulted to be a fraud, liar and thief. Through the truth that in the meantime has come to light with the help of the Plejar Quetzal, the whole sad matter presents itself in the way I have described above. That signifies, that Lee Elders has greatly been wronged, for which I publicly apologize with great respect in this way and also hope, that everyone who had acknowledged in good faith that slanderous matter, will accept it as a lie and slander and correct the image of Lee Elders to see it again in the right light. In order to reach all the wrongly informed ones, and above all, to publicly vindicate Lee Elders, I choose to do this in this way through the channel of this bulletin that is circulated in my name and in FIGU's name worldwide in the Internet.

There is to be explained also, that Lee Elders has never taken a stand and defended himself against the slanderous accusations and has patiently endured everything over a time of more than twenty years, and in spite of wrongful differences in regard to FIGU and my person, he continued to be a good and dear friend and thus, I express my sincerest thanks to him. Would I have not asked Quetzal some time ago, to finally get to the bottom of this whole matter, then this issue would have probably never been cleared up, and the differences would have continued to exist lifelong, and would have caused discord. Therefore, I thank also Quetzal in this way through the bulletin for his immeasurable assistance, but I also thank Ptaah who strengthened me in my effort, to publicly submit this unpleasant issue as it is presented here to the world, in order to end the defamation and slander towards Lee Elders - and to vindicate him.

Take a crash course in the real history of the Meier case. Not only has he been the target of 22 physical assassination attempts, and ongoing attacks against his character, but the original investigators as well were attacked for their work on the case.

Wendelle Stevens got sent to prison on trumped up charges, people lied about Lee and Brit to Meier and even for a long time Meier and the Plejaren thought that they had been dishonest, until they penetrated into the situation. But the Elders too were criticized and pressured for their involvement. I’ve had countless attacks against my character, false things said about me in a couple hundred pages online, etc.

None of us have hidden behind screen names, refused to state our actual positions, refused to substantiate our positions and claims, etc. I have contempt for cowards and liars. If someone’s going to come here and defame others, they won’t get a pass because they do or don’t support my position.