The Talmud of Jmmanuel

This section is not from an official FIGU publication and has been variably sourced. 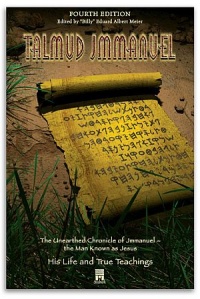 Fictitious artists illustration of one of the pages from the four rolls which contained many leaves or pages of Aramaic writing. They were obviously old and fragile but legible, roughly 30cm by 40cm in size, made of very thin, translucent parchment or of papyrus. They were destroyed in an Israeli bombing, no Physical Evidence available.[citations needed]

Jerusalem, 1963 - A Greek Orthodox Catholic priest, Isa Rashid, discovers a small cave in the slope of a nearby hill with his Swiss friend, "Billy" Eduard Albert Meier. They remove the rubble partially obscuring the entryway, crawl inside, and exhume a set of "ancient" scrolls wrapped in animal skin, encased in a dry, crumbly resin. Upon closer examination, faded yet fully legible pages of Aramaic text reveal a 2,000 year old biographical narrative of a man named Jmmanuel. He devoted his life to educating about the true nature of the universe, all aspects about life on Earth, the immortality of the human spirit through reincarnation, and of a way of life that is both liberating and free from the illogical constraints of human greed, lust for power and belief-related-delusions, see God-delusion and God-delusion Insanity. Much of the granular detailings of the man's life wasn't written down for posterity, but we can deduce an arrangement of theme consistencies.

The book has been examined carefully by representative scholars of the major religions e.g. Vatican City State, because it's relevant to what they're doing and therefore thoroughly interesting. But they don't want to admit to their investigation or for you yourself to read it. Isa Rashid paid with his life for translating the 36 chapters of the scrolls from Aramaic to German. He and his family were assassinated (murdered) in a so-called "dishonour killing" by religious lunatics, zealots and fanatics who had lost control of the plot (mental derangement). But not before 36 chapters of his translation had been sent to his friend in Switzerland, who subsequently assembled the text(s) into the agreeable presentation form of a book. Billy Meier's publishing of the Talmud of Jmmanuel has been partially responsible for the 23 murder attempts, to take his life, see Attempts on Billy's life.

The book allows the reader the opportunity to discover what truly happened to Jmmanuel during his forty days and forty nights 'in the desert'. One might learn who his real betrayer was, how he went about surviving his brutal so-called 'crucifixion' beating by soldiers representing the Roman empire and where he sought asylum after that police brutality. His ominous prophecies (some long since fulfilled) may well relate to our current times, and his teachings about the human spirit along with his self-determined path of human evolution may be of interest to the prospective reader. It has been claimed that the educational material he offered as a man and as a teacher, revolved around all manner of subject matter related to our lives and life on Earth, including the true meaning of life, namely consciously learning and consciously evolving.

The name 'Jmmanuel' is mentioned, with differing spelling presentations, in the so-called "Old Testament"; testament in this context presumably referring to biographical writing practices. Isaiah 7:14: "Behold, a young woman shall conceive and bear a son, and shall call his name Imman'u-el." We find a similar reference again in the so-called "New Testament". Matthew 1:23: "Behold, a virgin shall conceive and bear a son, and his name shall be called Emmanuel." This process of evolution has been interesting during independent study; she was a 'young woman' at some stage then later in history she became a 'virgin' etc., the Snowball effect (Wikipedia) and Rumour (Wikipedia) presentation attributes evolution by revision authors, in different generations, and different stages of our society has be thoroughly interesting.

For selected excerpts see the section below.

“ ...[the Talmud of Jmmanuel] could have one day revealed the untruthfulness of the Christian sect and all other sects and religions associated with it. But there still exists a good quarter of the script in the German version, and it will also be sufficient to bring the truth to light and to free the human being from a deadly delusion.

Please read Contact Report 501 because it explains that the TJ (fourth edition) contains many errors that were made by Isa Rashid during the translation from Aramaic to German and which were not corrected until the fifth edition. The 5th edition was published only in the German language in May 2011. There have been no announcements to translate the entire book into English again however watch this wiki for details of some of the corrections.

Selected Excerpts from the 3rd Edition

If Judas Iscariot is the author of the Talmud Jmmanuel, why isn't his name on the cover?

If Judas Iscariot is the author of the Talmud Jmmanuel, why isn't his name on the cover?

The printed version is not the exact original written down by Judas Iscariot, but a translation by Isa Rashid that has been revised (not altered!) by Billy (he added/inserted the code).[1]

Why is it that an act of divorce will go against the laws of nature?

In the TJ, chapter 20 talking about marriage: "What has been joined together in this way, let no human being separate, because it is against the laws of nature".


Why is it that an act of divorce will go against the laws of nature?

As divorce is very very common nowadays, I need strong logical reasons in backing up this concept.

This relates to true love ("empfindungsmässige Liebe", in contrast to "gefühlsmässige Liebe"). True love cannot be destroyed, and those who are dwelling in this deep and highly-evolved form of love shall not be hampered and be harmed in order to separate the persons. (To do so is an act against the laws of nature.)


The normal case within marriages is feeling-related love, which is quite superficial and is in danger to be dissolved anytime if it is not deep enough. This love form is normally based on and triggered by thoughts, sexual attractions, etc.[2]

(FOM Note: Goblet of the Truth has a section on relationships, marriage and divorce)

Healing oneself with the power of the spirit and consciousness

Hi Billy, This is a follow up question to one of my previous questions. In chapter 21 of the TJ, Jmmanuel said,


"And when you are knowledgeable and live in the truth of wisdom, your spirit and your consciousness will be filled with infinite power. Then everything you command or ask for in prayer, you will receive if you trust in it."

How can I use these principles to heal my Spinal Cord Injury?

In principle it is possible to use these forces/energies/laws, but in order to become capable for this you would have to devote your entire life to this goal (besides possessing the knowledge of "how to do it").[3]

The Letter From Isa Rashid to Billy

The Letter From Isa Rashid

I am sorry, dear friend, for not having written so long and for not being able to send you additional translations of the scrolls. That has its reason in my fears which unfortunately have come true now.

As I always told you, 1 was prepared that one day I would be persecuted on account of the discovered scrolls. That has happened now. Just barely was I able to flee from Jerusalem with my family. Now I am staying with good friends in Baghdad where, however, I cannot stay long and must move on soon. Where to, I don't know yet, bur I will notify you as soon as possible.

I have been persecuted by two different groups, both Christians and Jews, which was to be anticipated, because the scrolls are not favourable towards either religion. After my lucky escape a misfortune struck me, which cannot be made undone. First I fled from Jerusalem to Lebanon and stayed there at a refugee camp with my family. But there the Jews located me and, with their military, attacked the camp, which resulted in many deaths. Only with great difficulty my family and I escaped the massacre and we were able to flee once more. But unfortunately all scrolls got lost and they are no longer in my possession. I believe they all burned when the Jews destroyed the homes by fire, but maybe they fell into the hands of the Jews?

Then the Israelis announced that they had undertaken a punitive action against Palestinian guerrillas. However, in reality, they, together with some people from the Christian church, were after me and my scrolls. By means of the alleged punitive action they were now able to cover up and falsify the actual reason and purpose of their venture. And because of the disappearance of the original scrolls, any proof is missing that the New Testament of the Bible is an outrageous lie whereby mankind is condemned.

Dear friend, unfortunately these are the latest bare facts and I do hope that you and your family will not meet with the same fate as I. After all, you do have 36 chapters of the Talmud Jmmanuel and they do represent an immense danger to Christianity, the Jewish faith, Islam and other religions. Therefore be very cautious and see to it that those few existing teachings of Jmmanuel will not get lost. They are really too valuable. I for my part do withdraw from the whole matter because I cannot endanger my family even more. Therefore keep my name and everything else a secret on the occasion of publication. I entreat you to do so. I know that I can always rely on you and thank you for it. You will hear further news from me on occasion and I am sending you my best regards, also from my family - Isa Rashid.

Isa Rashid - The Translator Of The Talmud Of Jmmanuel

Excerpts from 'The Talmud Jmmanuel explanations'

The new edition of the TJ has about twice as many pages as the old one, because the spiritual level Arahat Athersata and Ptaah had asked Billy to add extensive explanations to the new edition, which are necessary to understand the TJ in its entirety.

The scroll, on which the TJ is based, was written by Judas Ischkerioth (This is the correct spelling of the disciple’s surname). Judas Ischkerioth was the only disciple of Jmmanuel capable of reading and writing. However, he only wrote down a small part of Jmmanuel’s teaching, because it was too extensive for him. But Jmmanuel did not worry about it because he knew that the prophet of the New Age would write down the teaching of the prophets, which Billy has done in the ‘OM’ and the ‘Goblet of the Truth’.

Some points of interest:

Some errors/falsifications by Isa Rashid:

Excerpts from 'Discovery of the Talmud of Jmmanuel'

Scholars problems with the Talmud Jmmanuel.
New Testament scholars cannot be made interested in the TJ because:

Major Biblical problems and questions the TJ allows us to solve.
It is handy to have a list of the major Biblical problems for which the TJ allows us to deduce true solutions. Although the Mt-TJ verse comparisons include some of these, they mainly present the minor discrepancies and problems within the Gospel of Matthew with which scholars are primarily concerned. The major questions are what most concern the non-scholar or layperson.