"The Great Journey" (Grossen Reise), also referred to as the "Great Voyage", "Great Trip" (translation variations), "5-day space-trip", "the space and time travel" or simply as "the trip"; was a carefully planned and guided tour by the Plejaren and Plejaren Federation personnel, see Contact Statistics. Through a rich diversity of sights, sounds, explanations, demonstrations and experiences; through space and time, to planets within the solar system and far beyond it, even to the beyond itself - lots of dimensionality to it, and all in a Beamship. It happened in the year of 1975, beginning on Thursday, 17th July with Contact Report 031 and ended on the 22nd of July. It apparently continued over Contact Reports 32, 34 & 35.[citation needed] The second part of the journey was described in Contact Report 039,[citation needed] which started on the 3rd of December and lasted 2 days.[citation needed] The events were not all exhaustively documented at the time, but briefly instead; probably to not overload the reader with too much detail at one time, it was an intensive 5 day experience with a lot to take in. However events were indeed later reflected upon, and in hindsight, with additional questions being posited and subsequently answered. The photos taken were regrettably sabotaged, but would have been 'worth a thousand words', serving to fortify and tell the story, we can deduce would have been the original plan and rationale for taking them. It's nevertheless a well documented story. 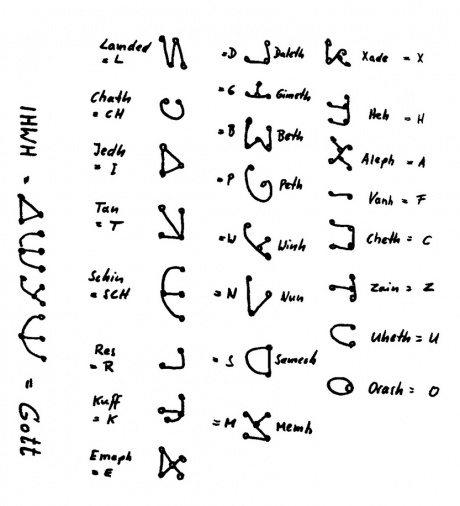 A sketch by Billy of the Plejaren alphabet

The Great Journey itself

Regarding: Contains continuation of the 31st contact report.
See PPKB and expand the contents of block 1 to see how it's been laid out in the Swiss German book itself.
Source: Contact Report 032

Regarding: Contains continuation of the 31st contact report.
See PPKB and expand the contents of block 1 to see how it's been laid out in the Swiss German book itself.
Source: Contact Report 034

Regarding: Contains continuation of the 31st contact report.
See PPKB and expand the contents of block 1 to see how it's been laid out in the Swiss German book itself.
Source: Contact Report 035


The Great Journey in hindsight

Regarding: Scientific demonstrations during the Great Journey.
Source: Contact Report 165

Regarding: Dark star, binary star of our solar system, USA coming to an end as a superpower after 2020, enormous contradictions with regard to politics, the economy, the military machinations, the decline of the culture, as well as the climbing religion and sectarianism and the serious criminal activity or even felonies of the former Presidents of the USA.
Source: Contact Report 544

M57, or the Ring Nebula. One of the photo forgeries

The Pteranodon Photo. One of the photo forgeries

The batch of photos associated with the 'Great Journey' are counterfeit forgeries, see Asket and Nera Photos and The Pteranodon Photo.

Quetzal took the photo's away with him upon being notified they had been sabotaged to examine them carefully and concluded there weren’t any there that had not been maliciously manipulated. They were edited in such a way that they mildly resembled the originals, fooling Meier and then making him look a fool. What made matters worse was that the image replacements were third-generation shots taken from future yet to be made Earth films and artworks inspired by Plejaren impulses, prepared in reinforcement of the Great Journey story and its supplementary photos taken by Eduard. Which would have been a good demonstration arrangement were it not sabotaged. Anyway what they were left with essentially were just the future artwork photos, before they were made, but which were inferior to the film artwork itself, a very hard sell indeed. It's been controversial, expertly researched and investigated over the decades, see Category:Evidence - a similar impulse inspired artwork occurs with Contact Report 104#The San Francisco Earthquake Photos by Wendelle C. Stevens if that has interested you to know.

With a modern digital camera it may have panned out differently because of the viewfinder screen and photo recall function with no intervening time where the photos had to be sent away to be developed. See Camera Data.

Regarding: The falsification of those particular photos.
Source: Contact Report 236